I basically taught myself how to play the drums when I was nine. I watched other drummers and applied their techniques. I struggled with the same thing most drummers struggle with, keeping the tempo. The organist at my church would tap on the organ to help me out. Then his taps got louder. Then he started banging on the organ until one day I did what all hurting kids do when they get unjustly embarrassed. I cried.

My daddy called him to talk to him about how he’d treated me. All the women who saw what happened told me not to let him get to me because I was doing a great job. All the women except for my auntie. She made it clear that she was very disappointed in me because “No matter what, you never let anybody see you cry.” I can still see her face.

I took that and unknowingly adopted it as a part of who I am. I hardened myself over the years. I went from being the girl who’d cry at any emotional time to the girl who didn’t have feelings. And I wore the didn’t have feelings badge so proudly. That is until I got to a place where I felt my feelings had been irreparably hurt. I couldn’t hide it. I couldn’t shrug it off. I had to feel them.

Last night, I dreamt I wrote a poem. Here it goes…

For telling myself I’m not pretty enough
For allowing my wit to make me appear tough
For beating myself up for having the urge to whine
For all the times I gave up without trying.

Sorry Auntie, believe me I really really tried.
But life has been so hard on me and after holding it in for so long
Today, I cried.

I have learned that one of the greatest signs of strength is being strong enough to admit that sometimes I get weak. 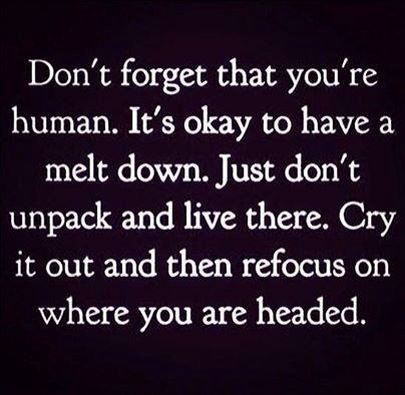