There was a pastor was at the Ella Baker Child Policy Training Institute (Freedom School national training) this summer. She told a story of when the leaders of the church asked the people in the congregation what they needed.

A homeless man stood up and said he needed a job to which she replied “We will pray for you to get a job.” He responded with “I don’t want your damn prayers. I want a job.”

Kirk Franklin has a song called “First Love.” There’s a line that says “They were quick to pray, but slow to move.”

I think that anecdote and those lyrics sum up my current frustration with Christian people. I feel the need to be a part of community movements especially those that deal with bettering people’s everyday lives so deeply that I literally can’t sleep sometimes because of everything that’s going on surrounding Mike Brown and every other Black victim of police brutality and racism in general.

I turn to Facebook to express myself and talk and some people hit me with “we just need to pray.”

I probably lost my amen corner on that last one.

I’m sure some people stayed at home to pray when Joshua and everyone else marched around Jericho.

Moses wouldn’t be all that cool if he had decided he’d done enough by talking to The Lord.

I’m curious if the Gospels would include the story of feeding the 5000 if Jesus had just stood there and prayed for everyone instead of feeding them.

How many people can you name in the New Testament who literally died for acting on what they believe?

To make this clear, I fully acknowledge that these people prayed first before they did the works they are known for. But I’d like to also make THIS clear. After they prayed, they did the work.

But we wonder why there are so many people who are raised in churches, but grow up to be atheists. Based on observation and conversation they’re tired of waiting on Jesus to intervene.

What they don’t understand is the same thing passive Christians seem to be missing. God gave us the responsibility of doing His work in the earth.

My new favorite song “Do Something” Matthew West

If you don’t feel like listening to the song, here’s the first verse.

I woke up this morning
Saw a world full of trouble now
Thought, how’d we ever get so far down
How’s it ever gonna turn around
So I turned my eyes to Heaven
I thought, “God, why don’t You do something?”
Well, I just couldn’t bear the thought of
People living in poverty
Children sold into slavery
The thought disgusted me
So, I shook my fist at Heaven
Said, “God, why don’t You do something?”
He said, “I did, I created you” 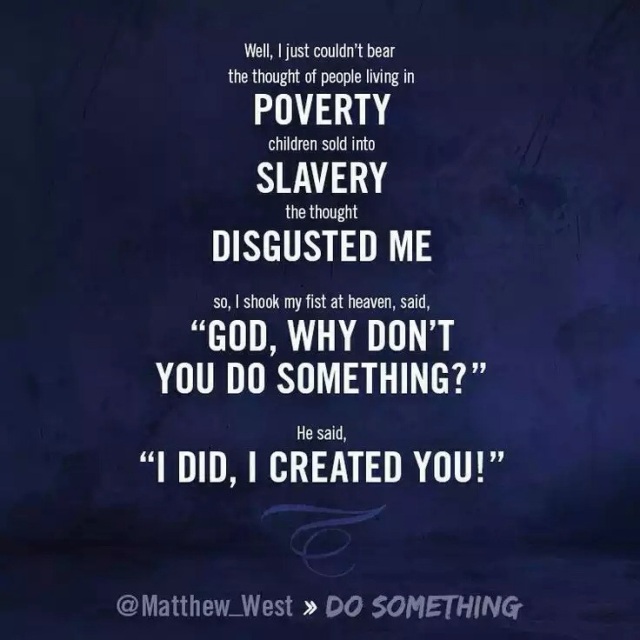 What good is it, dear brothers and sisters, if you say you have faith but don’t show it by your actions? Can that kind of faith save anyone? Suppose you see a brother or sister who has no food or clothing, and you say, “Good-bye and have a good day; stay warm and eat well”—but then you don’t give that person any food or clothing. What good does that do? So you see, faith by itself isn’t enough. Unless it produces good deeds, it is dead and useless. (‭James‬ ‭2‬:‭14-17‬ NLT)
—-
Related, but not related: I was listening to a Christian radio station and they played a clip of Max Lucado. He said that non-religious people tend to have longer marriages than Christians. The reason? When they have issues in their marriages, they work on them and fix them. They take responsibility. Christians, on the other hand, pray about the problems and when God doesn’t fix them they say it’s not His will to stay married and give up. Y’all see the correlation or naw? God clearly wants marriages to last and I’m just as convinced that He wants racial tension to end, but we have to work.

But OhCAE, imma stop here cuz I’m getting riled up.

Stay tuned for my next post where I discuss some of the responses I got to a question as posed in my Facebook status. “Can a thinking person be a Christian? (or devoted to any organized religion)”
You may or be not be surprised by some people’s reasons for staying with or turning away from religion.