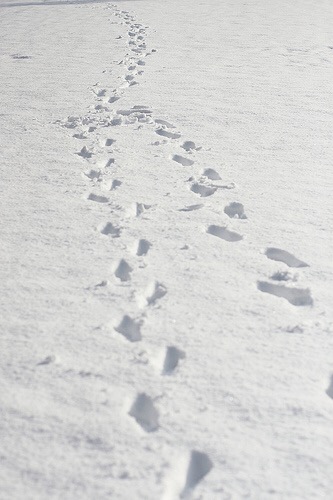 There was a day back in March when we had a really big snowfall here in Michigan. A couple days later we got rain and sleet and it made a really weird shimmering sheet of ice to cover the snow. The ice was kinda thin. When I stepped on it, it gave way and it had a sound and sensation that reminded me of how it probably feels when someone is ice skating on a frozen lake and they there’s a thin layered spot.

Anywho, I was walking my girls to school one morning after that rain came. We walked across the lawn because the driveway was pure ice. With every step I’d hear and feel the ice give way as my foot sunk down through the 8 inches of snow beneath it. My oldest kiddo, who’s 8, was just trudging through it ahead of me. My little one, who’s 5, was falling with every step. She had on all her winter gear and she was having fun so I didn’t trip. But eventually, I noticed that she was catching up to me. Just when I noticed she called out to me and said “Claricha, I’m walking in your footprints.”

I could hear the Holy Spirit talking to me through her words. After I dropped them off, I took a moment to ask the Lord what He was saying. He took me to this scripture

Jesus told him, “I am the way, the truth, and the life. No one can come to the Father except through me. (‭John‬ ‭14‬:‭6‬ NLT)

He began to explain to me one of the things He meant there. My little one was falling because she was trying to create her own path, but she was ill-equipped. When she looked up, she could see the a safe path was already made for her. All she had to do was walk in it. And that’s what the Lord is saying to us today. Just as He told His disciples that day, He’s the way. He has already paved the way. If we would stop trying to do things in our own strength and look up we will see that the way has already been made for us. All we have to do is look up and walk in the footprints.

The funny thing is when we came back she started making her own tracks again and falling again. Then I reminded her to just walk in my steps. She got back on track and she was fine. The Lord is saying that to you today. Even if you’ve made a misstep, you have time to get back in line with Him.